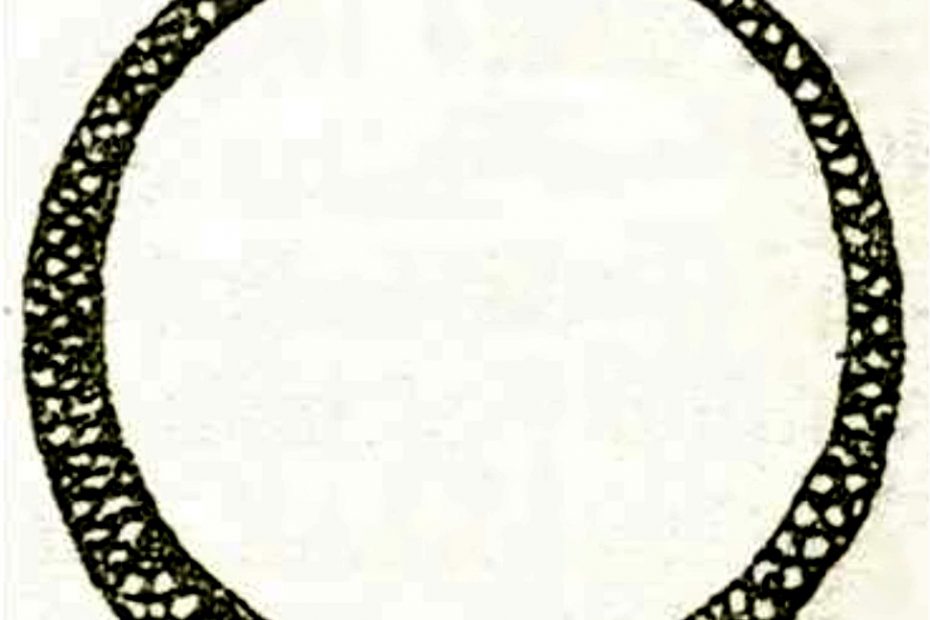 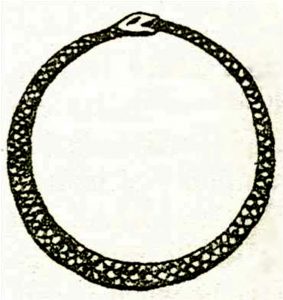 Let us take the serpent which forms the great circle of the seal. Swallowing its tail, it shows the cycle of eternity or the great spiral of evolution or the Manvantara. This is the circle of necessity of the Egyptians, the path of the numerous reincarnations of the soul. Merely even as serpent it signifies this, for the serpent casts its skin periodically just as man does at every death of his many bodies. It also signifies wisdom, as the Serpent has been called the wise, and, as shown in the Secret Doctrine, the word also meant the Masters of wisdom and power. Its tail running into its mouth means perpetual turning of the circle, or the periodical coming forth and disappearing of the manifested Universe.

Nearly every bible has this. Saint John speaks of the great dragon who swept with his tail one-third of the stars to the earth. That is, that in the course of this great evolution the serpent we are considering brought egos from the stars down to this globe, or up to it if you prefer and think it any better than the others in the sky. In the form of a circle it symbolizes perfection, as that is the most perfect figure, which, too, in its different relations shows us the great doctrine that the Universe was built by number, weight, and number, and is controlled or presided over by harmony now disturbed and now restored.

For, although the proportion of the diameter of the circle is as one to three, there is a remainder, when we are exact, of figures that cannot be written because we never should get to the end of them. This is the unknown quantity continually entering into the succession of events and ever tending to restore the harmony. 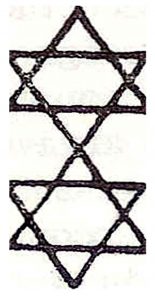 The two interlaced triangles come next in importance. This is the “Seal of Solomon,” so called because it was popularly supposed he used it when dealing with the genii that did his bidding. Among the Moors is a tale of how he confined one of the spirits in the Red Sea in a pot, on the top of which this seal was inscribed. But this is hardly the origin of it. On a very ancient Indian coin in my possession may be seen the same seal surrounded by rays of the sun, and the figure was known in the early ages in Hindustan. A couple of Brahmin friends of the writer state that it has always been known in that caste. In Isis Unveiled, page 260, H. P. Blavatsky has a very good exposition of it, accompanied with two diagrams illustrating its Hindu and Jewish forms. 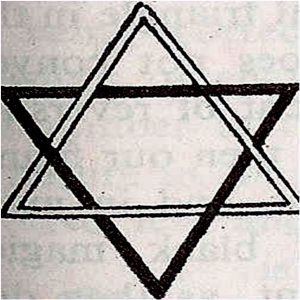 These triangles also symbolize the sevenfold constitution of man and all things. They have six points and six triangles enclosing a central space which is the seventh division of them and here represents the seventh principle or more properly the thinker, standing in the universe and touching all things from the six sides by means of the six triangles. The points of these touch the sides of the serpent or the great encircling wheel of evolution in and by which the thinker gains experience from nature. The white triangle–called the upper-refers to spirit, and the lower, or dark one, to matter; interlaced they signify, as said in the Bhagavad Gita, that spirit and matter are coeternal and ever conjoined. Thus they also represent the great opposites in nature and mind of good and evil, night and day, male and female, liberty and slavery, cold and heat, those great contrasts by means of which we are able at last to find the truth. In the Kaballah this figure is thought much of. Thus it is said that its representation in this world is a reflection or reverse of the real triangle in the upper worlds. But this statement does not convey much, because, if one tries the experiment of reversing the image on paper, it will be found that then our figure would have the black triangle uppermost, and in mystical writings that means the reign of black magic. Probably that is what the Cabalists meant, as they delight in calling this the dark world or hell. 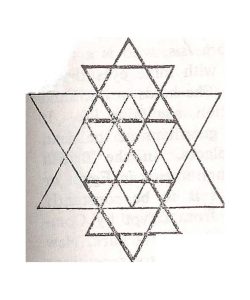 The thirty-third degree of Freemasonry may also be obtained from this figure. That degree is the Consistory or Council, emblematically the great body of the Sages or Governors, the collection or sum of all the others. The idea now illustrated may be new to Freemasons, but is nevertheless correct. Revolve the figure downwards so as to produce a reverse image, and we get two; as the Kaballah of the Jews has it, one the image of the other. Next take the two slanting sides, being the prolongation of the two downward pointing sides of the upper dark triangle, and make a reflection upon them as base on each side. The result will be the figure here shown, in which three smaller “Solomon’s seals” are contained within a greater one. If now the chambers or divisions in this new figure are counted, they will be found to number thirty-two, and by adding the figure as a whole we get thirty-three or the Consistory, which may be placed in the point in the centre of all. This may seem to be fanciful to some, but it is no more so than much else in Masonry. It has the advantage, however, of being correct, even if curious. This number of divisions or chambers, with the whole figure, also gives the number of the thirty-three crores of gods or forces of nature in the ancient Hindu Pantheon.