The Theosophical Society Miami-Deerfield Beach Branch is one of the oldest Lodges in the Nation with its charter dating back to Feb 9th 1919!!

The lodge has moved several times throughout the years.  Here is a short history of how we got here:

In February 1919,  a Mr. and Mrs. Hanchett came to Miami and rented the auditorium of the Woman’s Club for three evenings.

The lectures were well advertised and the first evening found the hall packed.  From these lectures a lodge of 19 members was organized with Mrs. Kate C. Havens of Chicago as President.

The Lodge met in the Conservatory of Music but by 1925 had rooms in a downtown office building.  Throughout its long history it has met in various other places in Miami.

In the 1950’s it met in a room in the back of a health food store that was owned by a member.

In 1960 the Lodge bought a garage apartment on NE 62 Street in Miami across from the Notre Dame Academy, a Roman Catholic girls’ high school.  They renovated it, adding a room in the front that became our meeting room and bookstore.  The library took up the back room.  In 1962 the work was finished and they moved into their new quarters.

During the 1980’s we realized for a variety of reasons that it was necessary for us to move.  We looked around Miami for many years but could not find a location that we could afford that was suitable.

In 1993 that opportunity came to us and moved to our current location here in Deerfield Beach, a shopping center with walk-by as well as drive-by traffic. 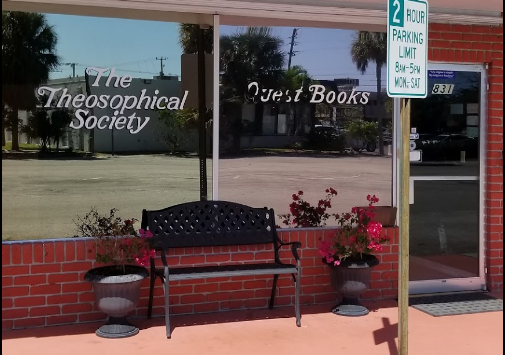