A History of Some Events Surrounding the Theosophical Society
in Miami & South Florida, 1993-2000 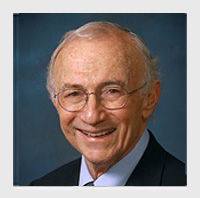 I have been requested by members of the Theosophical Society in Miami & South Florida (TSM) to recount some of the recent history of this organization as I remember it. My purposes in writing this are to fulfill this request for a six-fold purpose.

1. I wish to provide some permanent documentation for the archives of the Theosophical Society in Miami & South Florida so that historical fact will not be lost for want of it being set down in writing. These recollections are primarily for the years 1993 to 2000, five years of which I was President.
2. During these years some remarkable events occurred, events for which the psychiatrist C. G. Jung, coined the word synchronistic. This is to say that such events are meaningful coincidences that cannot otherwise be explained other than to call them simply coincidences or to infer to them some sort of intentional action by forces of which we are unaware.
3. During these years the relationship between the Theosophical Society in Miami & South Florida and the Theosophical Society in America (TSA or TSIA) with which it is affiliated, was attempted to be changed through the adoption of bylaw amendments by TSA in 1996. I would like the current members of the TSM and its officers and Board of Directors to be aware of what happened and why, so that they can act appropriately in the future with full information. 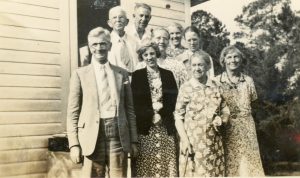 4. Because of my thirty years of experiences in affiliation with TSM, I have often felt that TSM in some sense, has a life of its own. Through good times and not so good times people have always seemed to step forward in support of the work of TSM whenever such support was needed.
5. Notwithstanding whatever difficulties arose between TSM and TSA during the years about which I write, current members will know that I am active both in TSM and in TSA as a financial supporter of and a facilitator of courses within both organizations. To some degree, the policies developed at TSM are being implemented at TSA in conformity with the three declared objects of the worldwide Theosophical Society, and it is my hope that this will continue. 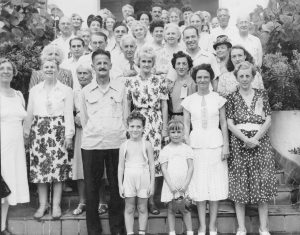 1947 FL Fed convention at Surfside Hotel – not all Miami people

6. Although I no longer take a role as an active officer of TSM, it is my hope and expectation that appropriate members of TSM will continue to step forward as needed to expand and further the work of TSM.

I shall begin this recollection several years earlier, in 1978. It was in May of that year when I first became acquainted with the Theosophical Society. At that time I was 43 years old and was casting about for more meaning in my life. I picked up a “new age” magazine at a bookstore in Fort Lauderdale, Florida, where I was a resident. The magazine was called Alternatives (since gone out of business) and it contained a variety of articles on various topics related to what were called “new age” philosophies in the 1960s and 1970s. At the back of the magazine were several small ads for various groups with what to me were strange sounding names many of which contained words from oriental languages such as the Hari Krishna Society. What especially caught my eye, and I cannot say why, was the Theosophical Society. 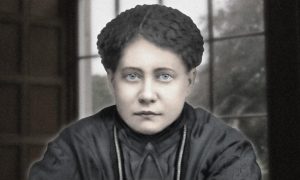 I had never heard the word “theosophical” or the related root “theosophy” so I looked it up in a dictionary. The citation stated: “the teachings of a modern movement originating in the U.S. in 1875 and following chiefly Buddhist and Brahmanic (Hindu) theories especially of pantheistic evolution and reincarnation.” I was interested but I was also cautious because I knew from press reports in the 1960s that there were many phony so-called “new age” religions and spiritual movements that were little more than money spinning cults. I checked further in the Encylopedia Brittanica. There was in the Britannica a more extensive article about theosophy and the Theosophical Society along with a photo of a likeness of H. P. Blavatsky, the principal founder of the Theosophical Society in New York City in 1875. To my way of thinking at the time, a citation in the Britannica lent an air of credibility to the organization.

The advertisement gave the address of the local Theosophical Society, which at that time was located in Miami, some twenty-five miles south of where I lived in Fort Lauderdale. I drove there and met several of the members. I liked what I saw, a modest but well maintained 2,000 sq. ft. building with a library and tiny book selling space. I was especially interested in what the organization called the three declared objects of the Theosophical Society. These appeared to avoid a commitment to any one religious teaching and presented the Society as a place for the common investigation of spiritual and related matters. Being in sympathy with these objects was the sole requirement for membership, so I paid the modest membership fee and joined. This was in May of 1978. Members will be familiar with these objects. They are worth restating:

1) To form a nucleus of the universal brotherhood of humanity without distinction of race, creed, sex, caste or color;
2) To encourage the comparative study of religion, philosophy, and science;
3) To investigate unexplained laws of nature and the powers latent in humanity.

To be sure, there was a theosophical teaching. The word “theosophy” comes from the Greek, “theos” meaning divine, and “sophia” meaning wisdom. Theosophy meant divine wisdom. Many of the well known philosophers of ancient Greece were known as theosophists. In that respect, theosophy can be said to have started there, but the basis of the ideas long predate the Greek civilization, and the modern movement founded by H. P. Blavatsky in 1875 is more accurately known as neo-theosophy.

There seemed to be no effort to impose these theosophical teachings on anyone, least of all members of the Theosophical Society. By joining the organization I met numerous people who were familiar with various spiritual movements of which I had never heard. The members were kindred spirits with an inner quest for meaning similar to my own search. This led me to investigate many of these movements, and rather quickly in that same year to go to India which is a major fount of spiritual philosophies. I was especially attracted to the teachings of G.I. Gurdjieff (1866-1949?) a Greek-Armenian mystic, about whom I was told on my first visit to India (Webmaster Note: Click Here For Gurdjieff Article By Sy). There were so many synchronistic events that led up to my going to India and all that happened to me as the result of that first visit and of the many subsequent visits. I will not recount these here since they are part of my personal history and not necessarily the history of TSM about which I write.

Though I investigated and in some instances participated in several movements devoted to one or another spiritual philosophy, such as the philosophy of Gurdjieff, I continued my membership in and affiliation with both TSM and TSA during the thirty years between 1978 and 2008. In fact I became a life member of TSA.

By 1983 TSM was beginning to have difficulties as a viable organization. These difficulties continued and worsened for almost ten years until a culmination and change of direction took place in 1993. The President, Nori Rao, decided to move to California in 1993. The first vice-President, Frank Muscarella, took the presidency briefly, but issues of his health and his business situation required that he move out of the Miami area and to North Carolina This was in early 1993. By that time I was the organization’s treasurer and a member of the seven person board of directors. We were casting about for a new President.

Conditions had gotten very bad in the neighborhood where the TSM was located, and no one wanted the job of President. But I decided I would take that job provided that the other board members would commit to the idea that we either move the Branch to a different location or close it altogether. We had little choice as we were running out of funds and membership and participation had drastically declined. The other board members so committed themselves, and along with this commitment the fortunes of the Branch began to change significantly.

So much happened to TSM in such a short time beginning with the commitment to move or close in 1993, that in 1994 I wrote an article about it for The American Theosophist, the journal of the Theosophical Society in America (since restyled as The Quest). I will here take the liberty of reproducing that article which appeared in the Early Spring 1994 issue of The American Theosophist, Volume 82, Number 2. It describes the events of 1993 and 1994 to which I refer. Please note that brackets in the article represent additional comments by me that are not in the article as it was published.

Webmaster note: Email us using the Connect Page if you wish a copy of the article.