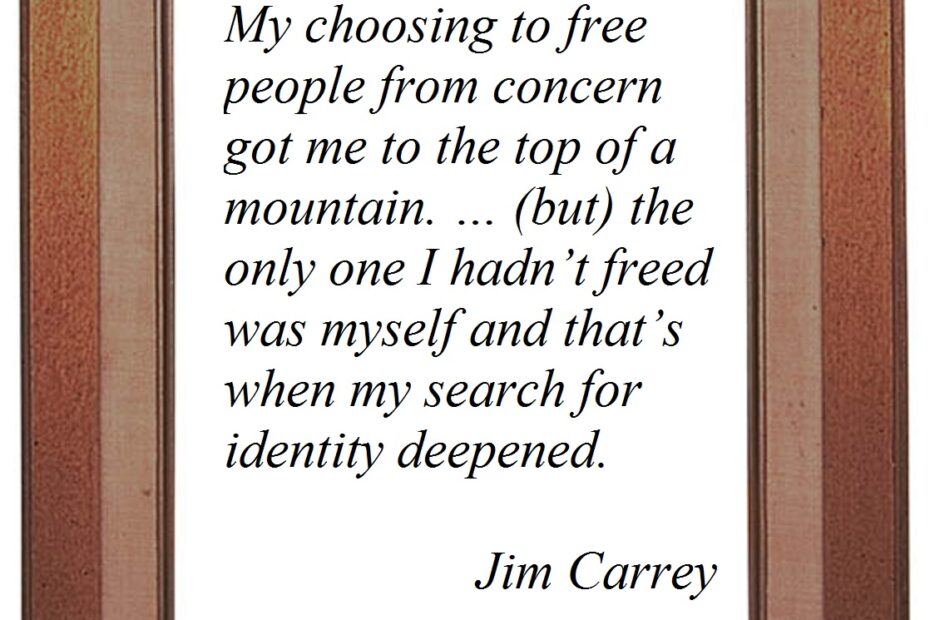 Among the most enlightening graduation addresses I’ve heard was Jim Carrey’s at Maharishi University of Management. Having received my Masters degree from this bastion of higher learning that awakens your higher Self, I proudly share its highlights.
The comedian/mystic says: 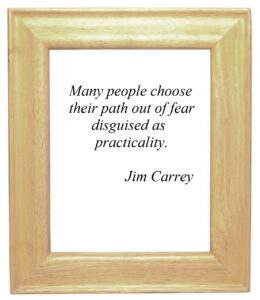 “I thought Jim Carrey is all that I was… The great nothing masquerading as something you can name. You didn’t think I could be serious did ya’? I don’t think you understand who you’re dealing with! I have no limits! I cannot be contained because I’m the container.”

He then fuses spirituality with laughter:

“I believed I ended at the edge of my skin…(in) this little vehicle called a body to experience creation, and though I couldn’t have asked for a sportier model, it was after all a loaner and would have to be returned.”

Those familiar with affirmations recognize Carrey’s seriousness and comedy:
“Many people choose their path out of fear disguised as practicality. What we really want seems impossibly out of reach and ridiculous to expect, so we dare not ask the universe for it…I’m proof you can ask for it!…If it doesn’t happen right away, it’s because the universe is busy fulfilling my order. It’s party size!”

He discourages livelihoods to tolerate for lovelihoods to adore.
“My father could have been a great comedian, but he didn’t believe that was possible…Instead, he (became) an accountant (until) he was let go from that safe job…I learned great lessons from him…that you can fail at what you don’t want, so take a chance doing what you love…I watched the affect his love and humor had on the world, and I thought, ‘That’s something…worth my time.’”

Here’s a portrait of the comic as a young boy…

“People would come to my house and they’d be greeted by a 7 year-old throwing himself down a flight of stairs. They’d say, ‘What happened?’ And I’d say, ‘I don’t know — let’s check the replay.’ And I’d go back to the top and come back down in slow motion.”

“My father bragged that I wasn’t a ham — I was the whole pig. He treated my talent as his second chance…After a decade as a comedian, I realized…. the purpose of my life had always been to free people from concern…I dubbed my new devotion, The Church of Freedom From Concern—and dedicated myself to that ministry.”

Doing his dharma (calling) helped Carrey command eight-figure deals, but then there’s spirituality…
“My choosing to free people from concern got me to the top of a mountain. … (but) the only one I hadn’t freed was myself and that’s when my search for identity deepened.”

He applauds those who’ve applauded him.

“But you…already know who you are and that peace that we’re after, lies beyond personality… Risk being seen in all your glory…You’re not the pictures on the film stock, you’re the light that shines through it.” 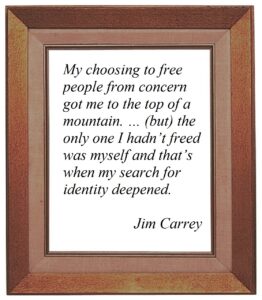 Then addresses your ego which,

“will tell you that you cannot stop until you’ve left an indelible mark on the earth, until you’ve achieved immortality. How tricky is the ego that it would tempt us with the promise of something we already possess.”

The minister who teaches freedom from concern concludes:

“I just want you to relax—that’s my job—and dream up a good life! It’s about letting the universe know what you want and working toward it while letting go of how it might come to pass. Your job is not to figure out how it’s going to happen, but to open the door in your head and when the doors open in real life, just walk through….You’re ready and able to do beautiful things in this world.” 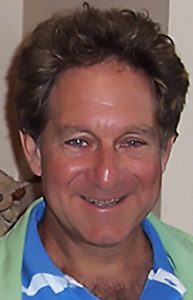 Cary Bayer is a keynote speaker and New York and Florida-based Life Coach, who’s worked with Oscar-winners Alan Arkin (Little Miss Sunshine) and Pietro Scalia (JFK, Black Hawk Down), Emmy-winners David Steinberg (Academy Awards presentations) and Judy Henderson (Homeland), and Quality Inns. The author of 15 books, including A Course in Money Miracles, 40 Days to a Happy Life, Relationships 101, Conscious Communication, and How to Overcome Procrastination. Now, he’s a former TM teacher, and trainer of teachers, and is the founder of Higher Self Healing Meditation. He is also a long time supporter of the Miami/Deerfield Beach Theosophical Society, presenting regularly on a variety of topics.