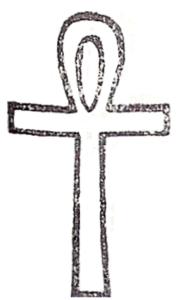 No less ancient and interesting than the triangles is the Egyptian cross placed in the very centre of the seal within the six-sided chamber made by the interlaced triangles. This should be a glittering white in colour, as it represents the regenerated man as well as life. The top oval is matter, and the lower arms spirit, which joined to matter is life both material and eternal. It is also the sign of Venus. And Venus is the elder sister of the earth according to the Secret Doctrine. On Venus are felt our changes, and those proceeding on her affect us. This cross is found in nearly every Egyptian papyrus. The Book of Job is really a translation, somewhat altered, of the Book of the Dead used by the Egyptians. In this the soul–or the candidate–enters the Hall of Two Truths to be judged before Osiris. He is Job. Entering he stands before Isis, who is a maid and says, “I made a covenant with mine eyes that I should not look upon a maid.” She holds in her hand the symbol given in the illustration, signifying life. It was placed in the hands of the guardians of the dead and in many different other places. In the British Museum in the papyri, and on monuments in Egypt or those in Europe and America, it is to be constantly found. On the obelisk brought from Egypt by Commander Gorringe and now setup in Central Park, New York City, a count shows more than thirty repetitions of this symbol. Examining a mummy-case that by some chance was exhibited in Tacoma, Washington, last year, I saw many of these painted on the case. It is one of the most ancient of all the symbols. 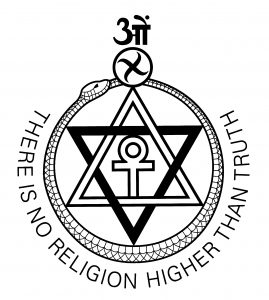 The bent cross in the little circle placed on the serpent at the top of the seal joined to the apex of the upper triangle is the Swastica. It is found almost everywhere in the East, as well as among the earlier Christians and elsewhere in Europe. Many meanings have been given to this: sometimes it represents the whirling of the will, and again the “Wheel of the Law” mentioned in both Buddhistic and Brahmanical books. The Buddhas are said to give the Wheel of the Law another turn when they come, and Krishna tells Arjuna that he who does not keep properly revolving the great wheel of action and reaction between the two worlds lives a life of sin without purpose. In India Swastica represents the spot or centre in which the forces from the great unknown pour to show themselves subsequently in various manifestations; and also it stands as a representation of the great mill of the Gods, in the centre of which the soul sits, and where all things are drawn in by the turning of the axle to be crushed, amalgamated, and transformed again and again.

This ends an analysis of the seal of the Society. In 1875 the writer of this at request of Col. Olcott drew a design for a pin for the use of members which was then made first by a Maiden Lane jeweler. It is formed by combining the serpent with the Egyptian tau so as to make “T. S.” The illustration shows it taken from a cut made from the old design last year (1891), when the pins began to be used more than previously. They are now worn by a good many members in both America and Europe. Col. Olcott has one that was presented to him just before last London Convention by a New York Theosophist.

The Sanskrit “Aum” at the top of the seal and the motto are later additions, adopted after Madame Blavatsky and Col. Olcott went to India. The Aum in its present position is to be read as the “Fountain of Light, the Sun which illuminates our minds, and the goal of our endeavour” –that is, truth, for Theosophy constantly proves to us that “There is no religion higher than Truth.”